In early December, I shared two posts with some of the weekly videos that I have been creating for the LES Center. Since then, I have created more videos, and I wanted to take a moment to share some of them with you today. These videos focus on talks she had with campers at Laurel Falls about racism, the ways that Smith connected her … Read More LES Center Videos: III

During the camp season at Laurel Falls, Lillian Smith would write letters home to the parents of campers. In the mid-summer 1946 Laurel Leaf, she wrote to parents about the adventures of Buss Eye, the plays that the girls wrote, and other camp activities. Near the end of the letter, she writes about the conversations that the campers had after hearing about the lynching … Read More Empathy in John Ira Jennings and Damian Duffy’s “Parable of the Sower” 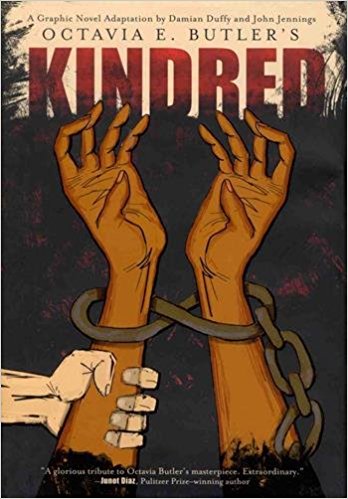 The last time I read Damian Duffy and John Ira Jennings’ graphic novel adaptation of Octavia Butler’s Kindred (1979), I zeroed in on the ways that Jennings represents faces and emotion in the text, specifically through Dana, Sarah, and Rufus. In this read through, I noticed the multiple panels with hands, either embracing, playing, or in confrontation. Today, I want to take a moment … Read More Intimacy and Hope in Duffy and Jennings’ Adaptation of Butler’s “Kindred”

The Past in Kirsten Imani Kasai’s “The House of Erzulie”

Over the past year, I have been thinking about a project that am currently working on. The project involves examining African American texts from the 1960s and 1970s that center on interracial relationships. I chose this time period because the Supreme Court struck down anti-miscegenation laws in 1967 in Loving v. Virginia; however, even forty years later, racist individuals still disapproved of interracial relationships. … Read More Interracial Intimacy and “Loving v. Virginia” Syllabus